Any of the links on this page may be an affiliate link. Triptora.com receives commission for purchases made through these links. The price is the same for you, though! Thank you for your support, and enjoy your visit on our site! 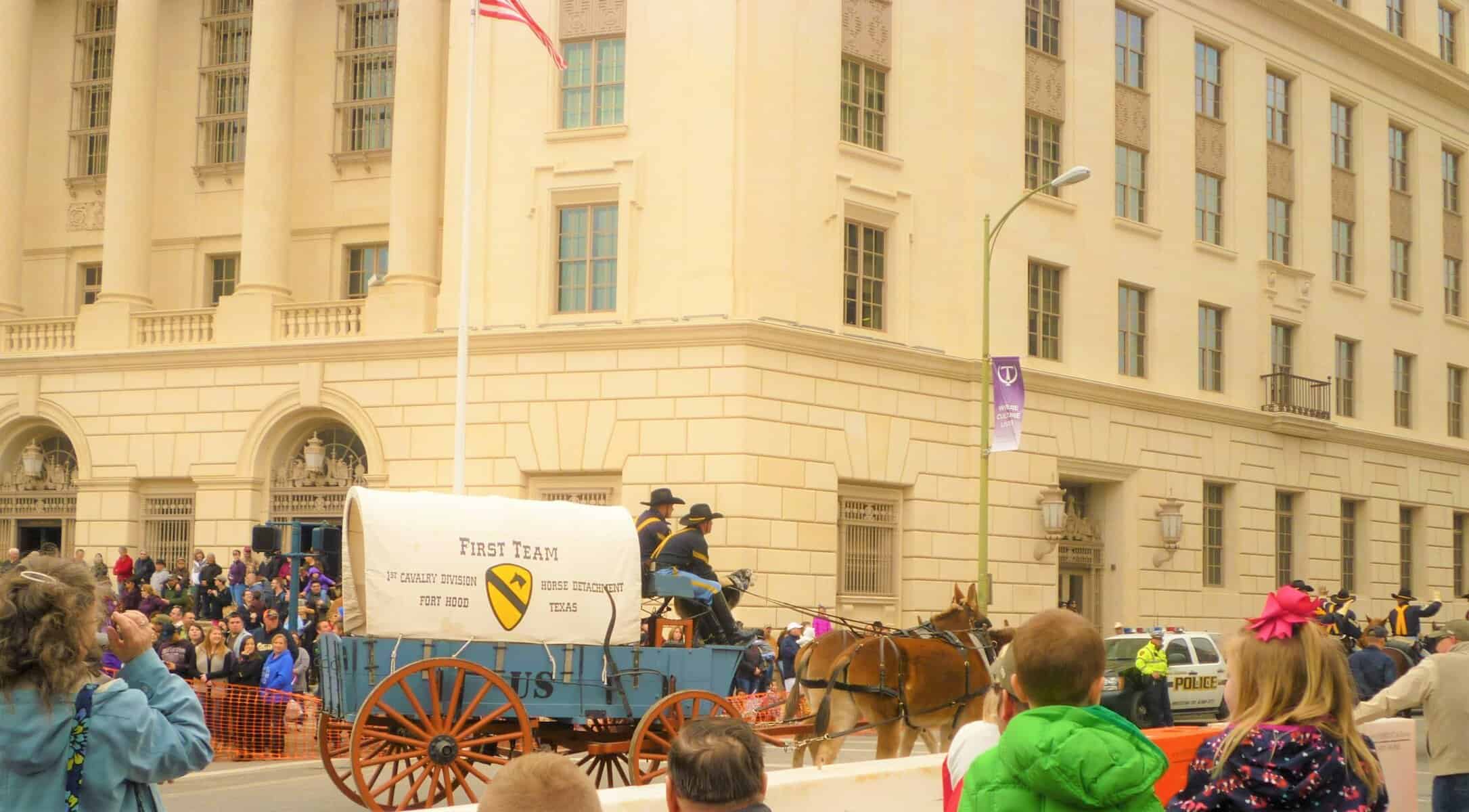 To begin, the Western Heritage Parade and Cattle Drive in San Antonio is an annual event. It marks the kick-off of the San Antonio Stock Show and Rodeo.

Definitely, this one of the best of the many free fun things to do in San Antonio. The parade is a celebration of the rich historical legacy of the state of Texas and the Old West. As part of this unique event, drovers usher a herd of Texas Longhorn cattle through the city, just like the great cattle drives of ages past. Git along, little dogies! 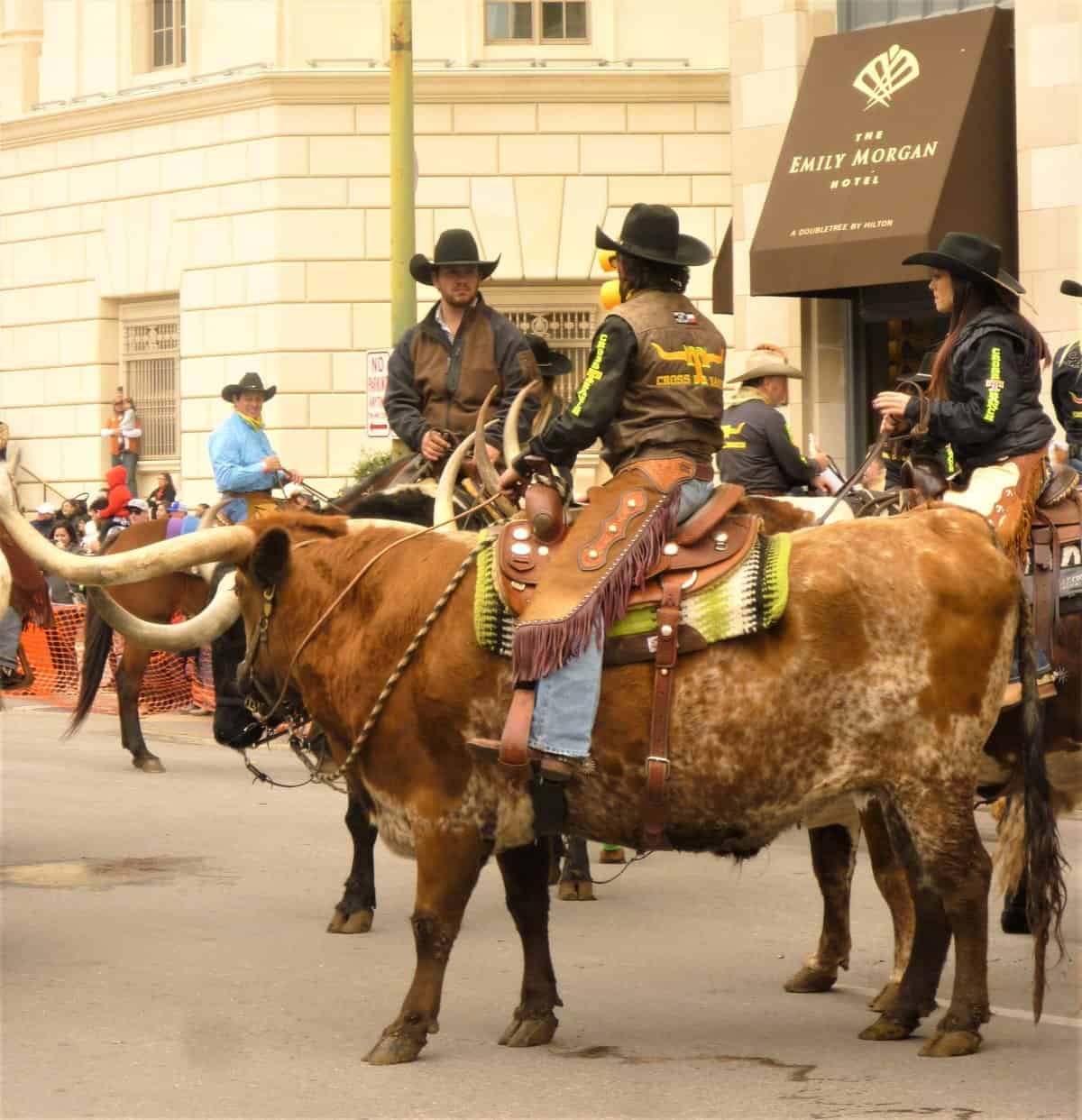 Cowhands riding Texas Longhorn steers. Picture taken across from the Alamo in front of the Emily Morgan Hotel

The parade route winds for a mile and a half through the heart of downtown San Antonio. It begins under I-35 near Christus Santa Rosa Hospital, mostly following Houston Street (with short construction detours some years). This year the parade route ends at the Alamo. 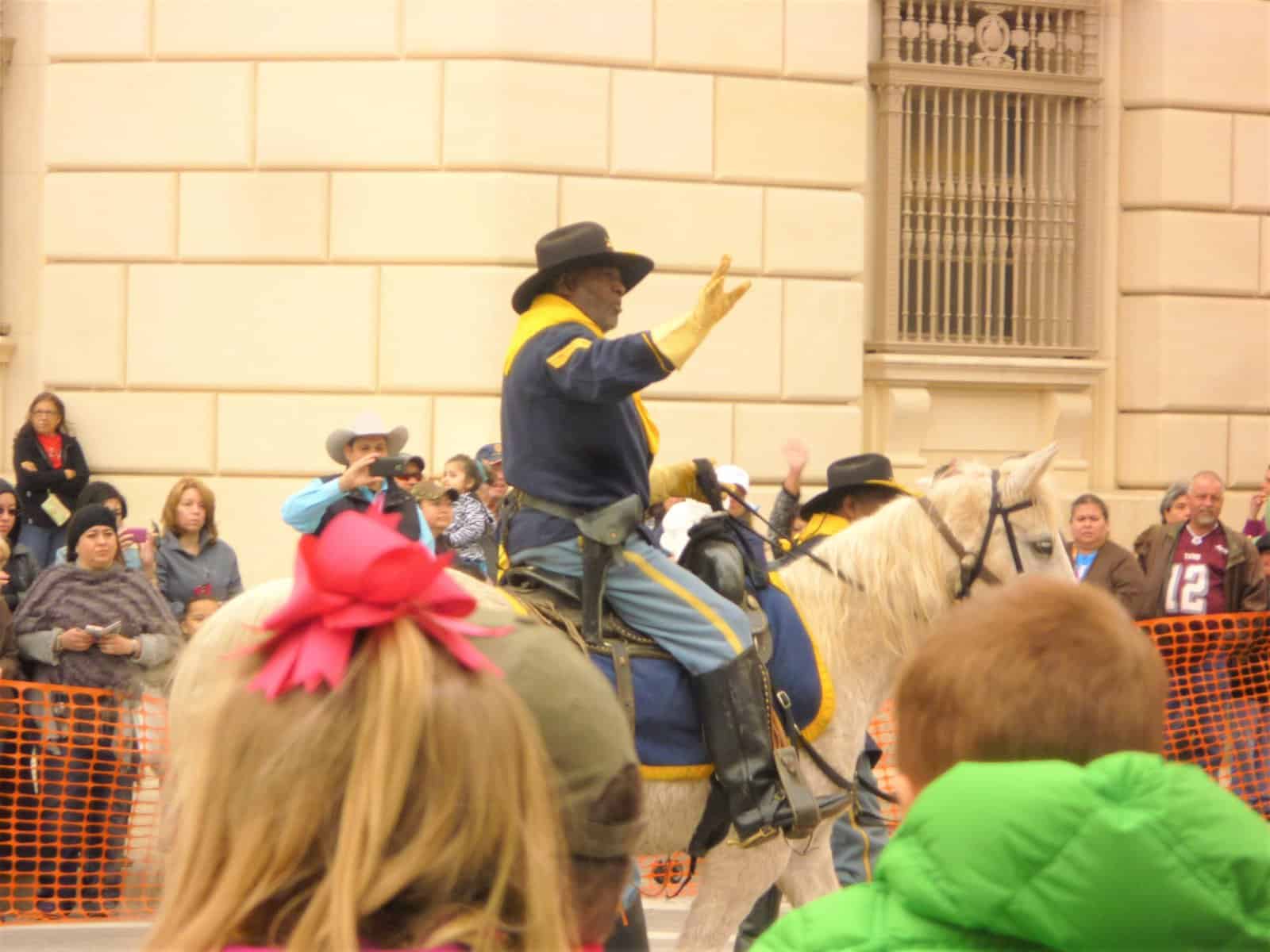 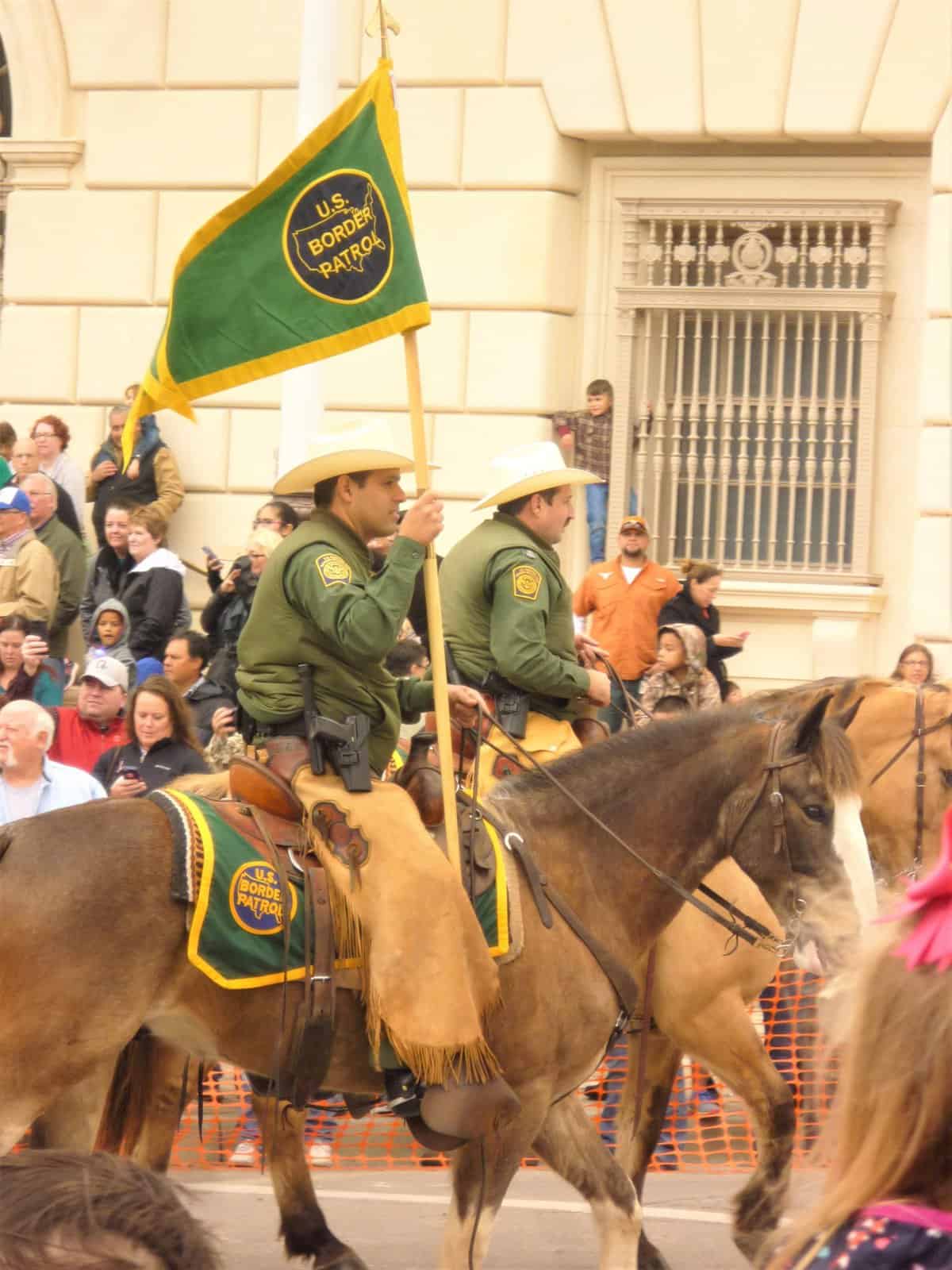 What Will You See in the Western Heritage Parade and Cattle Drive?

This San Antonio parade is a grand procession of humanity and beasts. It all starts with a stampede of steers…a cavalcade of cattle leading the lineup.

Buxom barmaids in bustiers blaze a trail down the boulevard in a wooden-wheeled wagon.

Escaramuzas in elaborate embroidered skirts wend their way sidesaddle through the center of this old bastion of the Spanish Empire, Mexican Republic, and American frontier.

Lassoers languidly launch lariats as they lope down the lane. 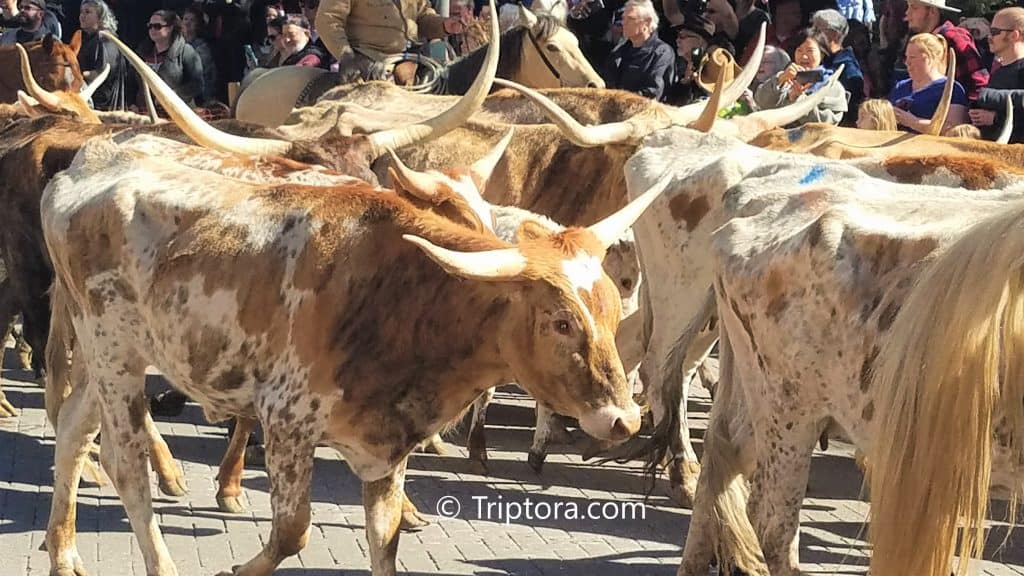 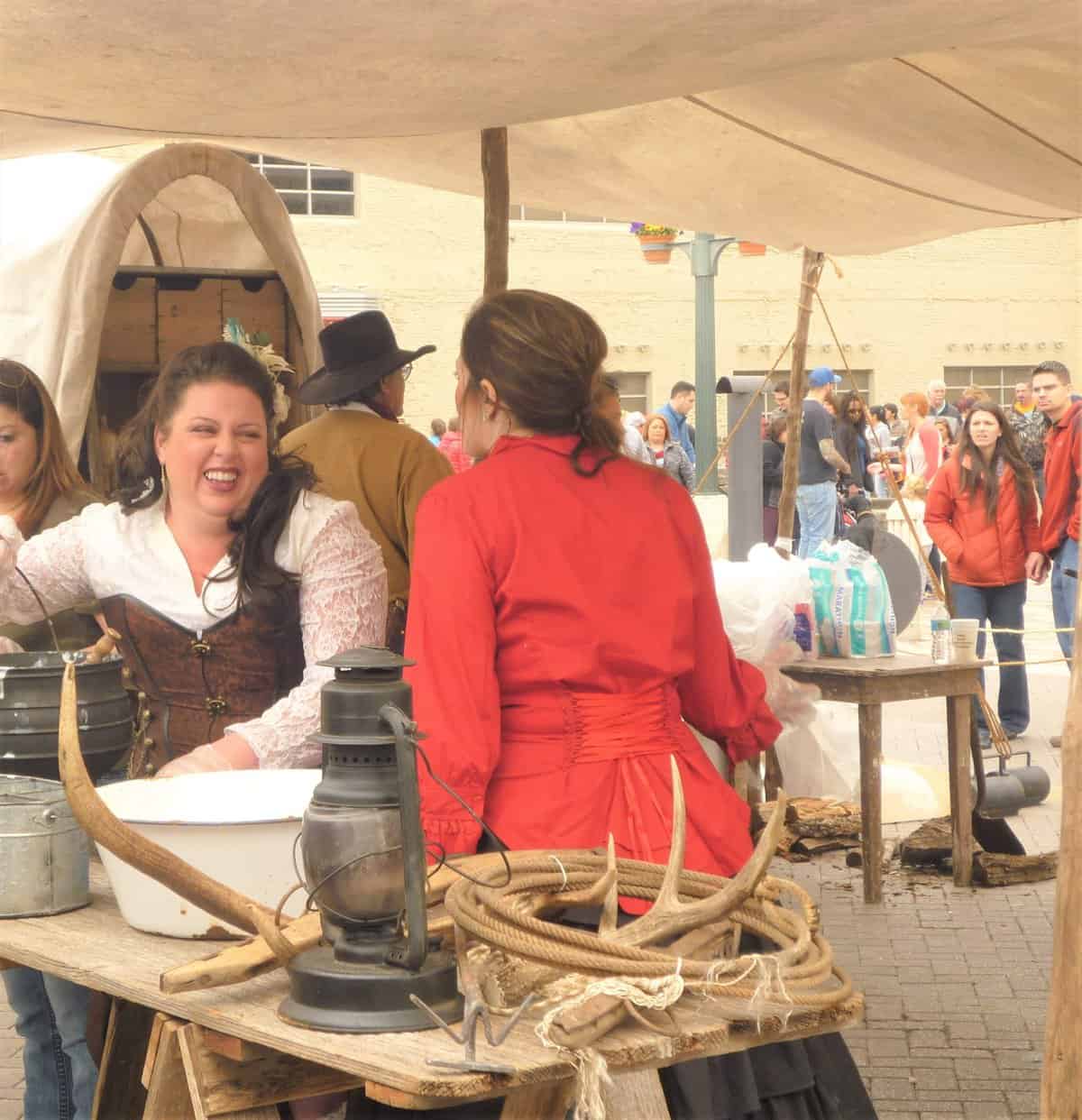 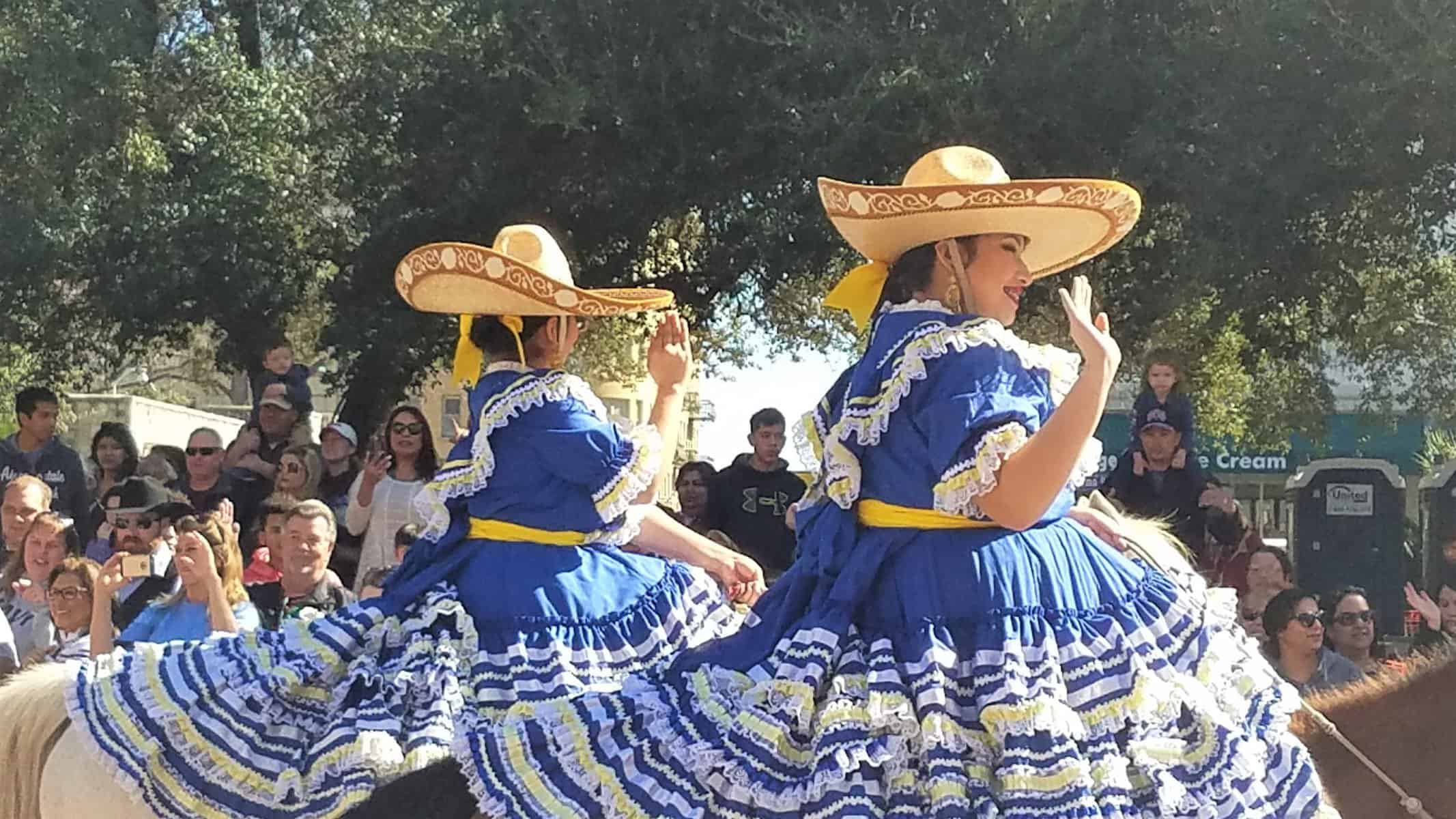 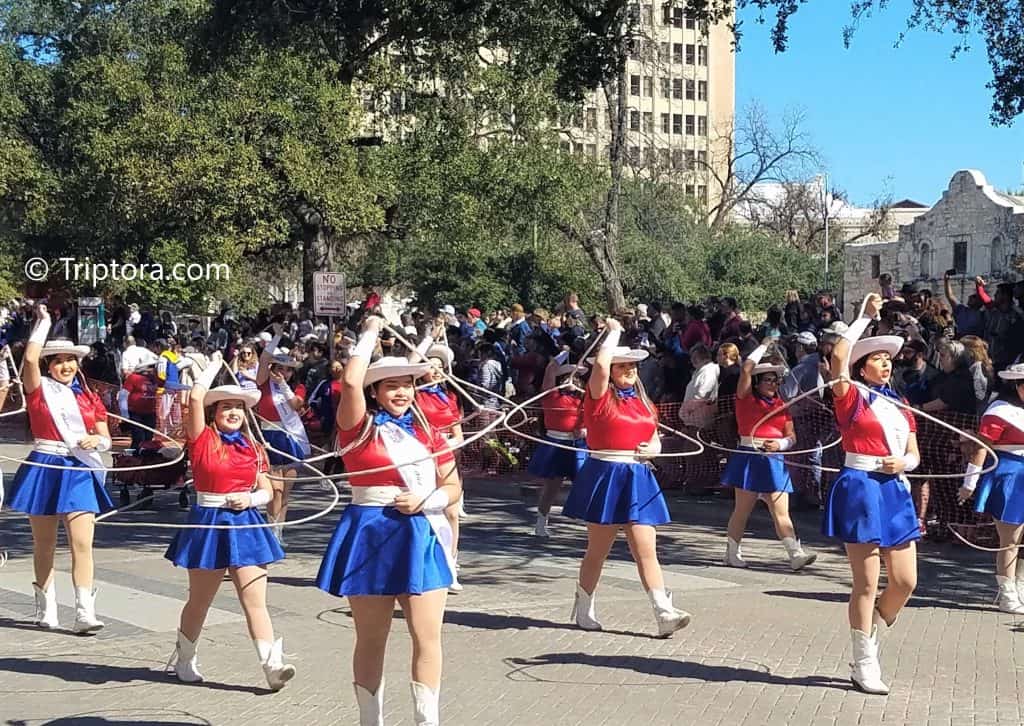 For sure, if the signature of the Fiesta® San Antonio Battle of Flowers® Parade is its famous footwear (“show us your shoes!”), then it might be fair to say that a hallmark of the Western Heritage Parade is the headwear. 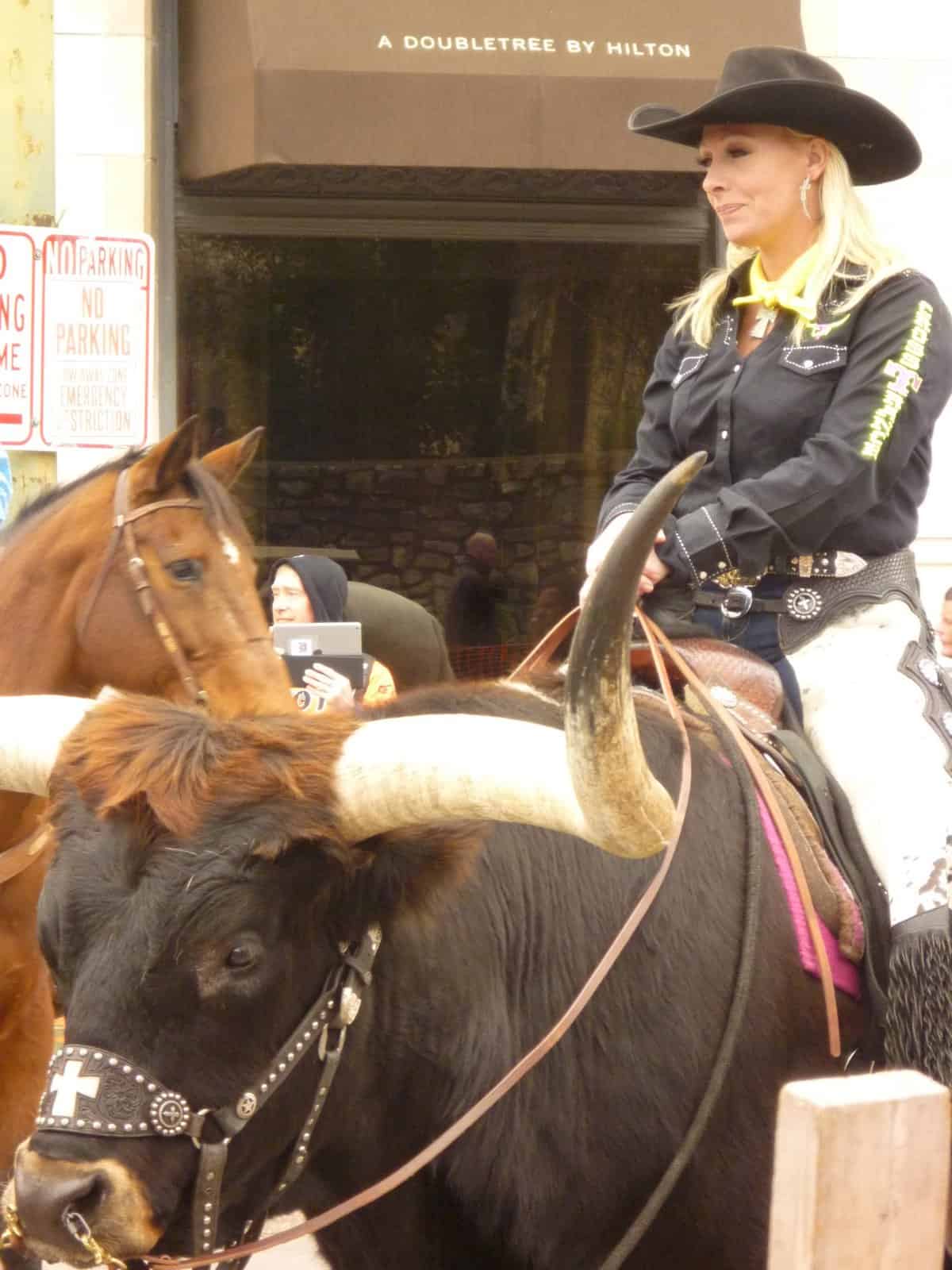 Admittedly, other Texas Western heritage parades exist, such as the Fort Worth All Western Parade and the Houston Downtown Rodeo Parade.

However, no other city can boast what San Antonio can: the very ALAMO right along the parade route!

Certainly, if you are staying in the one of the hotels near the Alamo or the Riverwalk at this time of year, it would be wonderfully memorable to stroll over to Alamo Plaza to enjoy this colorful, free San Antonio rodeo parade.

The Western Heritage Parade and Cattle Drive is part of a Western Heritage Weekend that features a number of events in downtown San Antonio. These include a Stampede 5K run/walk before the parade (Saturday, February 5th 9:30-11:00 AM), as well as a Wrangler Breakfast (authentic chuckwagon breakfast, biscuits and gravy, and vendor booths) at Santa Rosa St. between Houston and Commerce Streets (Saturday, February 5, 9:00 am to 12:00 noon). Plus, a Vaquero Cook-Off and Concert will feature stars of Tex Mex cuisine like chili con carne, carne guisada, charro/borracho beans, and menudo (Saturday, February 5, 2022 from 8:00 AM – 11:00 PM, free to the public, after the parade).

So in conclusion, take advantage and enjoy all the fun and colorful cultural legacy of Texas and the Old West! Get all the details about Western Heritage Weekend here. 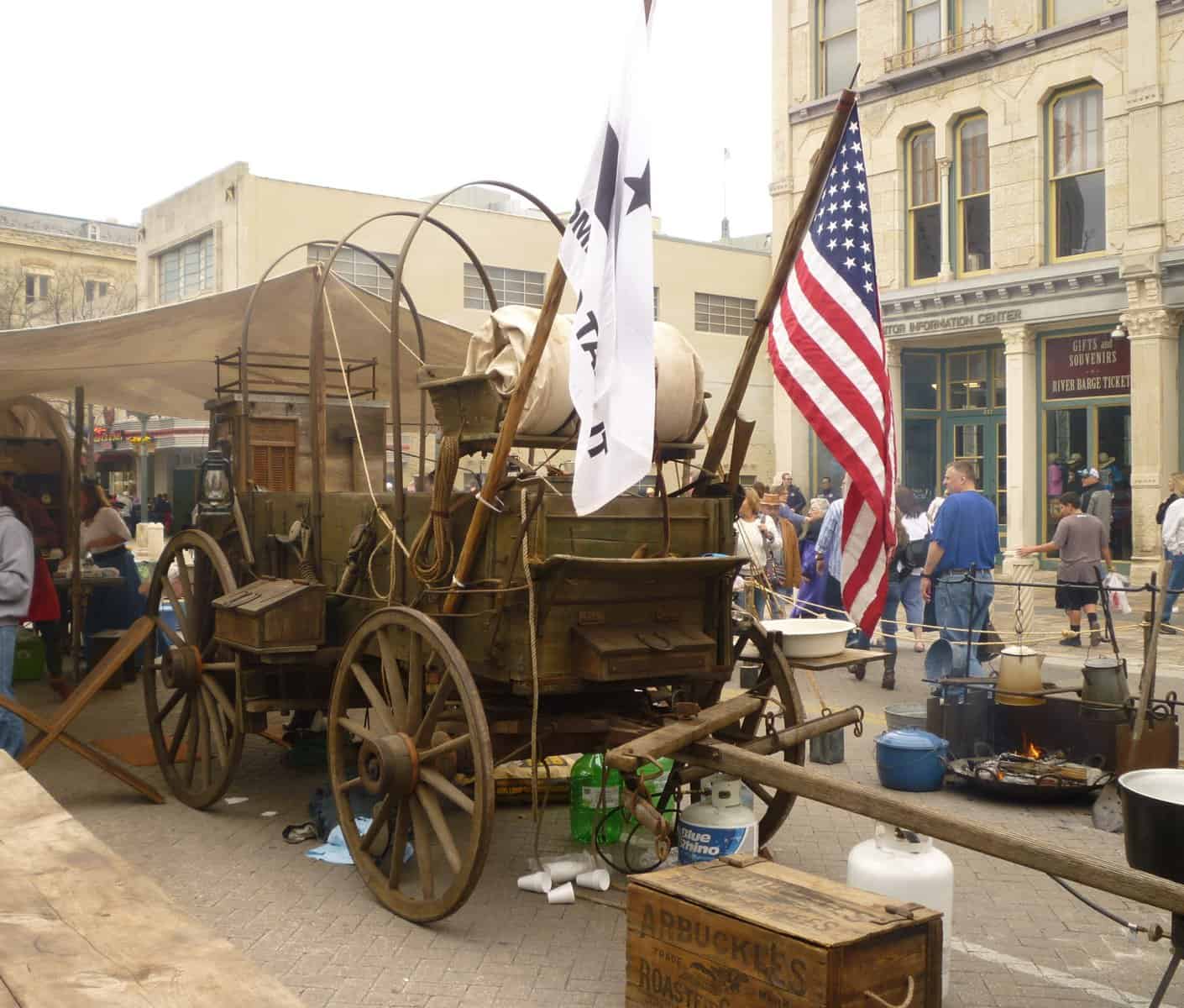 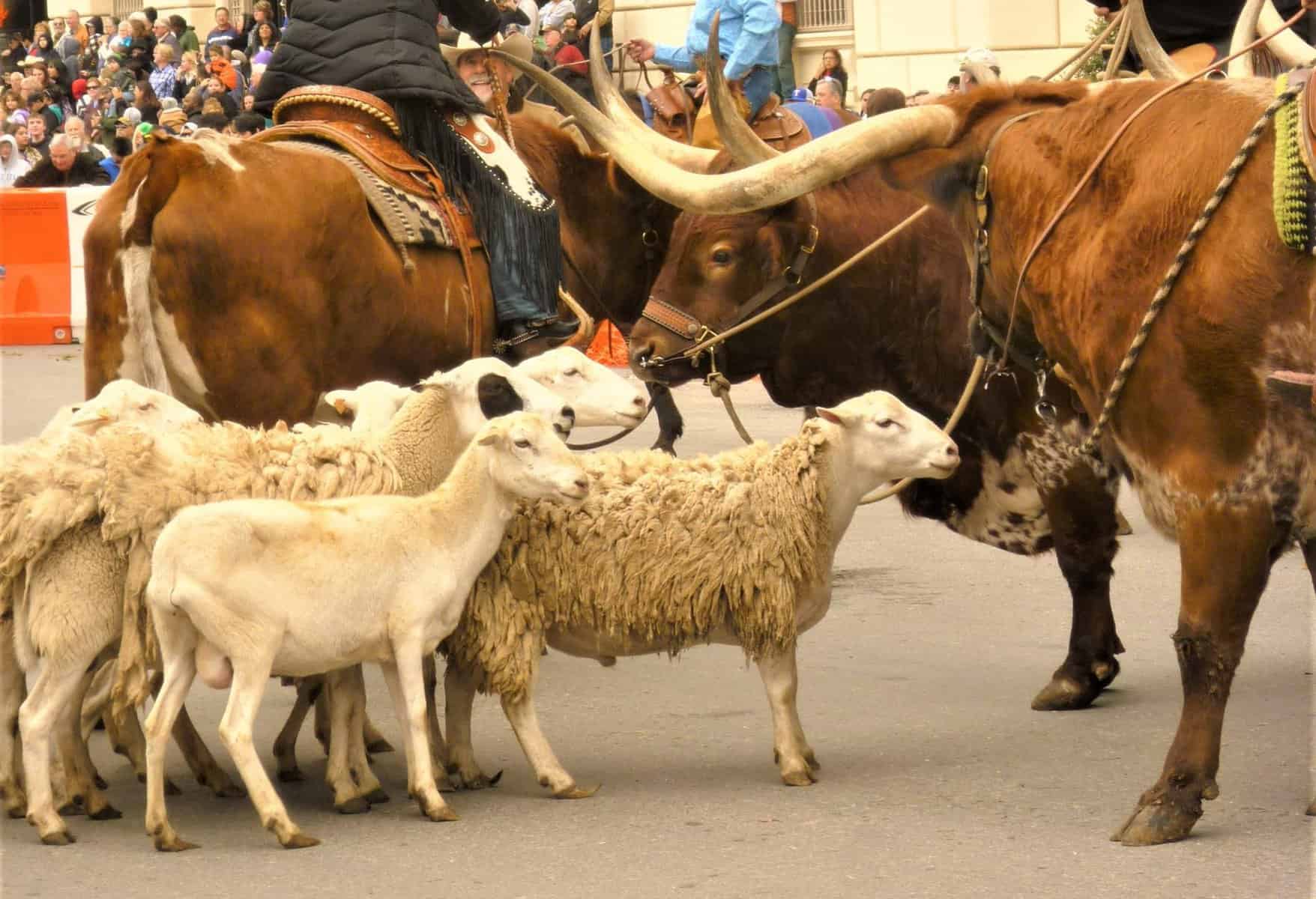 When is the San Antonio Western Heritage Parade & Cattle Drive?

What is the parade route of the Western Heritage Parade in San Antonio?

Parade starts at I-35/Houston St., and initially follows Houston St., then makes a construction detour north to W. Travis St. between Santa Rosa St. and Flores St). Parade route then turns back down onto Houston St. and continues on to the parade end at the Alamo.

We use cookies on our website to give you the most relevant experience by remembering your preferences and repeat visits. By clicking “Accept”, you consent to the use of ALL the cookies.
Do not sell my personal information.
Cookie SettingsAccept
Manage consent

This website uses cookies to improve your experience while you navigate through the website. Out of these, the cookies that are categorized as necessary are stored on your browser as they are essential for the working of basic functionalities of the website. We also use third-party cookies that help us analyze and understand how you use this website. These cookies will be stored in your browser only with your consent. You also have the option to opt-out of these cookies. But opting out of some of these cookies may affect your browsing experience.
Necessary Always Enabled
Necessary cookies are absolutely essential for the website to function properly. These cookies ensure basic functionalities and security features of the website, anonymously.
Functional
Functional cookies help to perform certain functionalities like sharing the content of the website on social media platforms, collect feedbacks, and other third-party features.
Performance
Performance cookies are used to understand and analyze the key performance indexes of the website which helps in delivering a better user experience for the visitors.
Analytics
Analytical cookies are used to understand how visitors interact with the website. These cookies help provide information on metrics the number of visitors, bounce rate, traffic source, etc.
Advertisement
Advertisement cookies are used to provide visitors with relevant ads and marketing campaigns. These cookies track visitors across websites and collect information to provide customized ads.
Others
Other uncategorized cookies are those that are being analyzed and have not been classified into a category as yet.
SAVE & ACCEPT