Any of the links on this page may be an affiliate link.  Triptora.com receives commission for purchases made through these links.  The price is the same for you, though!  Thank you for your support, and enjoy your visit on our site.

San Antonio, TX is a major city in the US state of Texas.  It’s location is in the transition zone between Central and South Texas.  The distance from San Antonio to Austin, the state capital, is 74 miles northeast “as the crow flies,” or 79 miles by car (1 hour 14 min).  The distance from San Antonio to Houston, the largest Texas city, is 189 miles east, or 195 miles by car (2 hours 52 min).

San Antonio is an historic and beloved city.  It recently celebrated its tricentennial year, having begun more than 300 years ago in 1718.  It was founded as Presidio San Antonio de Béjar (Béxar), when the region was an outpost of imperial Spain.  San Antonio later played important roles as a part of Mexico, the independent Republic of Texas, and now the United States of America.

After his travels to the city, landscape architect Frederick Law Olmstead, who later went on to design Central Park in Manhattan, New York City, gushed: “We have no city, except, perhaps, New Orleans, that can vie, in point of the picturesque interest that attaches to odd and antiquated foreignness, with San Antonio.” 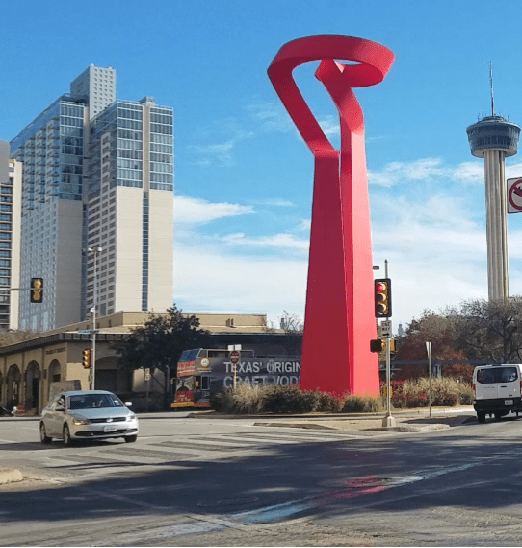 The Torch of Friendship by Mexican artist Sebastian, a 50-ton sculpture commissioned by the Association of Mexican Entrepreneurs of San Antonio, given as a gift to the city. The Tower of the Americas is in the background to the right. Copyright © 2020 Triptora.com All Rights Reserved

The famed poet Sidney Lanier wrote in his historical sketch: “If peculiarities were quills, San Antonio de Bexar would be a rare porcupine.  Over all the round of aspects in which a thoughtful mind may view a city, it bristles with striking idiosyncrasies and bizarre contrasts.  Its history, population, climate, location, architecture, soil, water, customs, costumes, horses, cattle, all attract the stranger’s attention, either by force of intrinsic singularity or of odd juxtapositions.”

Nicknames for the City

San Antonio nicknames are common.  Some of these include “Alamo City” and “River City,” the two most popular among city residents.  These names respectively refer to the city’s role as the home of the historically important Alamo Mission and Battle, as well as the source of the vital San Antonio River.

It is also very common to hear San Antonio shortened to “San Antone.”  This is a jovial and informal nickname of long standing.  It dates back to the years of the Mexican Republic before the battle of the Alamo.  Although residents of San Antonio no longer use it themselves (ever!), you can commonly hear this jocular nickname for the city in other parts of the US.

Other less frequent San Antonio nicknames include Mission City (a nod to the city’s five historic Spanish missions), Military City USA (in reference to its significant military base and facility presence), and “the 210” (referring to the regional telephone area code). 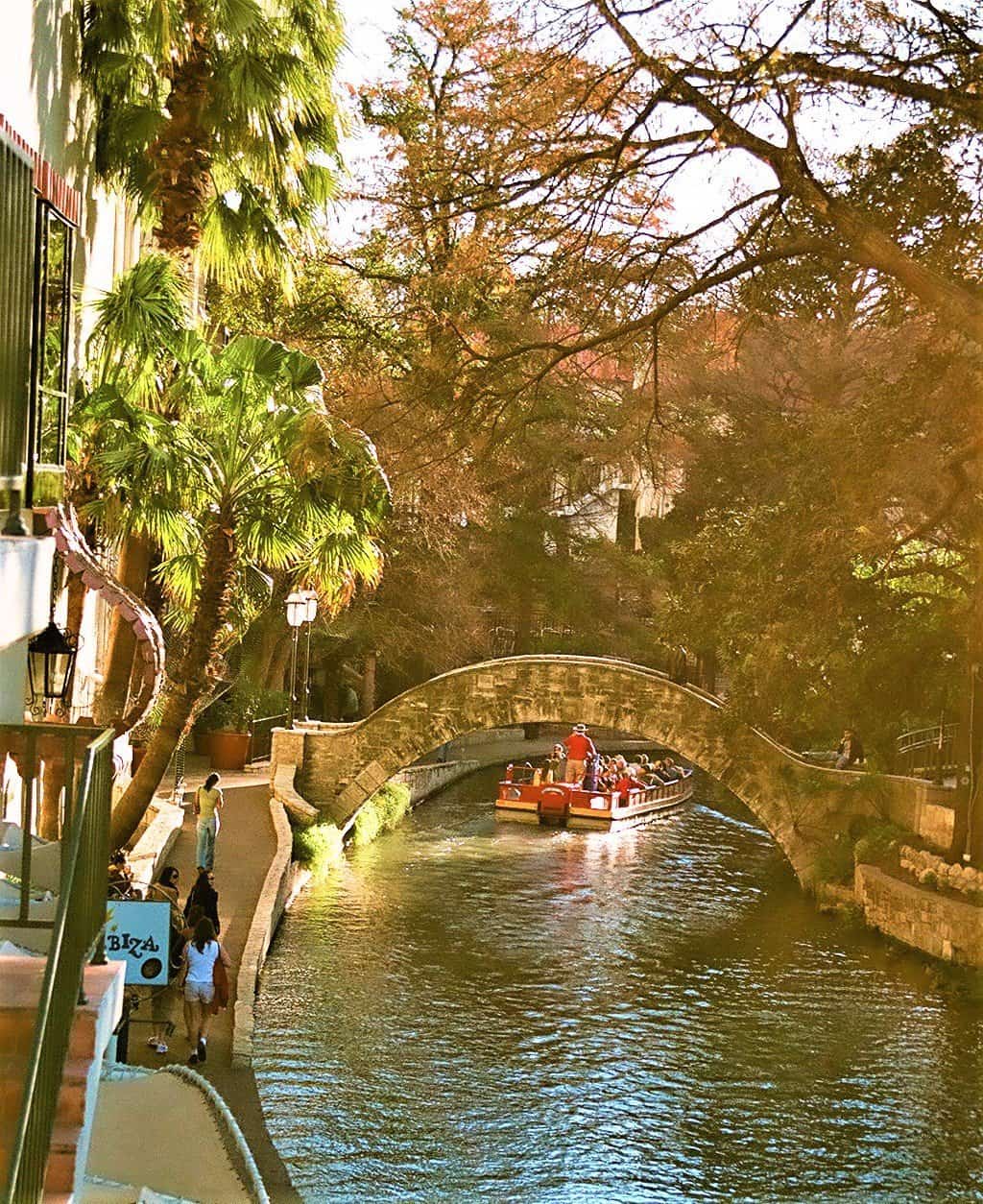 View of tourists enjoying a river cruise on the San Antonio River Walk in the fall. Copyright © 2020 Triptora.com All Rights Reserved

The two top tourist destinations in the state of Texas are the San Antonio River Walk and the Alamo.  These two attractions are both in San Antonio TX.

San Antonio is also home to a number of amusement parks.  Some of these are: SeaWorld® San Antonio, Six Flags® Fiesta Texas, Morgan’s Wonderland and Morgan’s Inspiration Island, and Splashtown San Antonio.  There are others in surrounding towns.

Besides tourism and related retail and food services sectors, San Antonio’s diverse economy comprises a wide range of other industries.  Some of these include: healthcare and biomedical research, education, military, government, business/financial services, the energy sector, manufacturing, and cybersecurity.

Folklorico dancers performing the jarabe tapatio Mexican dance in front of the Alamo in San Antonio.

Several foreign countries have diplomatic representations in San Antonio.  The Consulate General of Mexico (Consulado General de México) is located downtown in the historical Federal Reserve Bank building at Navarro and Villita Streets (127 Navarro St).  Other consular offices in San Antonio recorded by the Texas Secretary of State include honorary consular representations of the nations of Belgium, Belize, Chile, France, Mongolia, Namibia, and the United Kingdom.

View from the tree-covered hills overlooking San Antonio with the city skyline in the distance. Copyright © 2020 Triptora.com All Rights Reserved

San Antonio’s climate is transitional.  The city’s location is where the humid subtropical climate of the Gulf coastal plains meets the semi-arid climate further west.

During the winter, the San Antonio weather changes depending on whether continental influences (winds blowing from the north and west) or maritime influences (with south and southeast winds from the Gulf of Mexico) prevail. Winter in San Antonio is generally quite mild.  However, cold fronts occasionally punctuate the winter weather, and on rare occasion can even bring snow.

San Antonio summers are usually long and hot, with conditions similar to the tropics.  Daily high temperatures during the summertime exceed 90 degrees most of the time. Some years these soaring temperatures can last well into September or October. 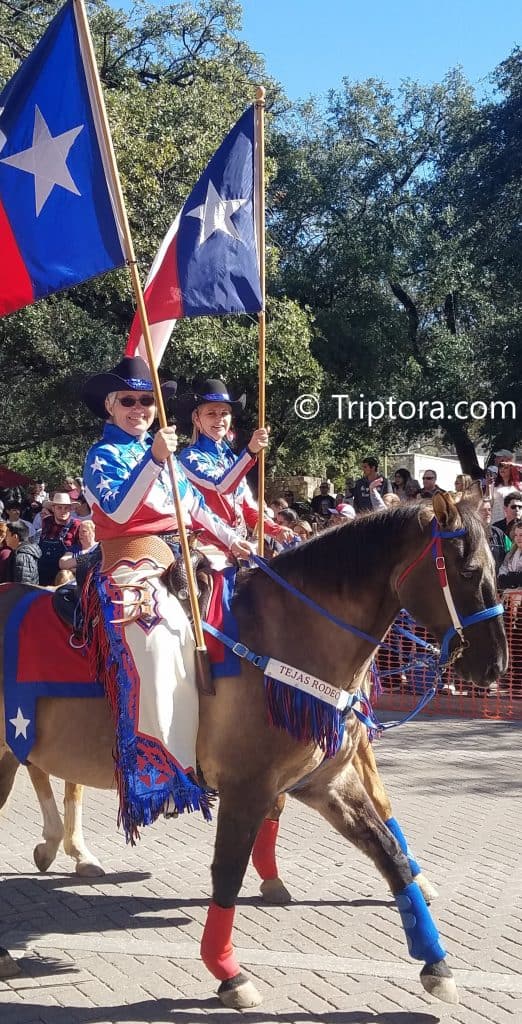 San Antonio Location: Desert or No?

Before visiting, some travelers envision San Antonio as a city in the midst of a flat Texas desert.  However, many are surprised to find instead that it is a city of gently rolling hills, oak and cedar woodlands, and meadows dotted with oaks.

The area is watered by the San Antonio River and many creeks, although, like much of the state of Texas, the region is subject to periodic droughts. Many areas and neighborhoods of the city, especially in times of good rainfall, merit the designation as “lush.” 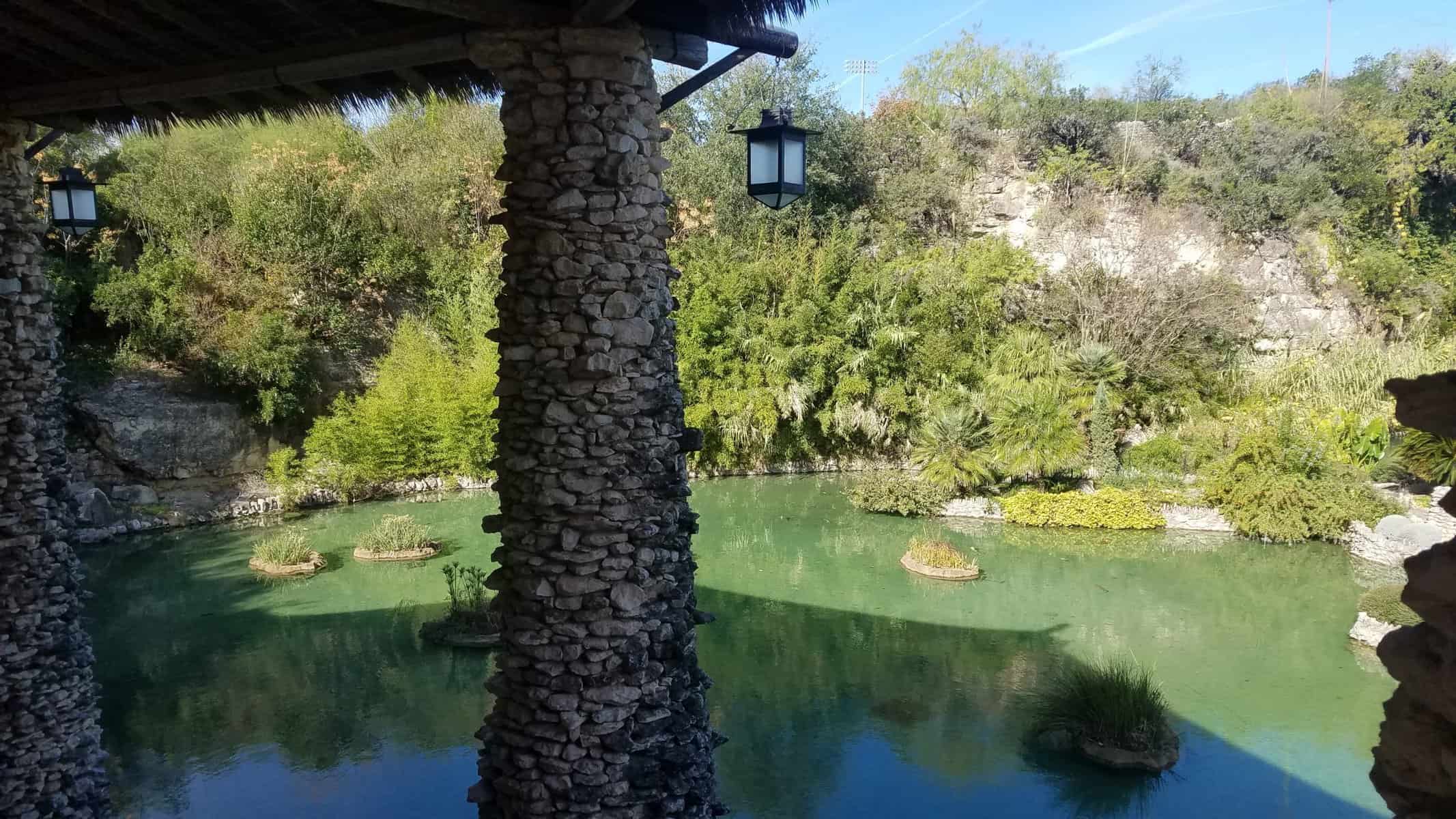 San Antonio is a vibrant city, rooted in a historic and colorful past, and rapidly expanding into a dynamic future.  Come explore this fascinating metropolis! 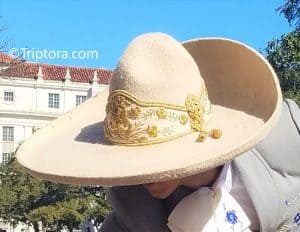